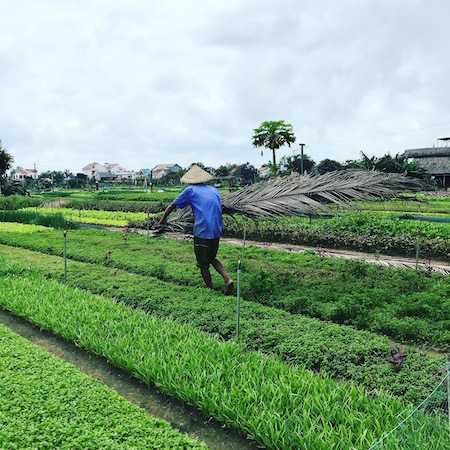 The last time I wrote about our wanderings it was mid-February. Everyone had heard about the corona virus, but it was not yet called a pandemic. Daniel and I were in Thailand and not worried, still in a holiday mood.

On the day we left Koh Lanta, we noticed something new. People who arrived on the island had to wait in line to get their temperature checked. We wondered for only a moment: Should we be worried?

In Chiang Mai, the decline in tourism was apparent. The Chinese were no longer able to travel and Westerners afraid of the “Asian” virus stayed away. The beautiful Thai temples were pleasantly calm.

The same was true for the Grand Palace in Bangkok, one of the world’s most visited tourist attractions. No waiting line, no crowds. It was at the entrance to the Queen Sirikit Museum, that my temperature was checked for the first time.

We flew to Cambodia at the end of February to visit the ancient temples. Before we came to Asia, I was worried that there were going to be far too many people in Siem Reap and that I wouldn’t be able to appreciate Angkor Wat if I had to fight the crowds and the heat and the mosquitos. As it turned out, we were often the only ones climbing the steps of the magnificent Khmer temples, and the heat and mosquitos were not a big deal. We rode our bicycles through the temple gates and into the jungle. We enjoyed our luck in life.

The first real worries found us in early March. The virus was spreading in Europe, which meant: It could spread anywhere. The carefree traveler’s feeling left us and we became alert. By the time we were ready to leave Cambodia, the threat of a pandemic had become real. What should we do? Where should we go? Other travelers might have decided to go home and wait it out. But we had no home to which to return. Where should we wait this out?

We decided to skip Myanmar and Laos. It was getting too hot there anyway and we felt safer in a country such as Vietnam, where healthcare had a better reputation. There were 54 verified cases in Vietnam and no deaths. We booked only two nights in Hanoi, because we didn’t want to be stuck in a big city during what could become a lockdown. We wanted to be near the ocean.

We traveled to Hoi An, a coastal town of 150,000 people, not counting the tourists. We arrived the day after the old town closed its Chinese assembly halls and all group tours were cancelled. We started to wear masks on the street, not for protection—believe it or not, we were still not worried—but because we considered it polite. The locals feared us less when we wore a mask. For them, the virus was European.

The only things that made us nervous during these first days in Hoi An were the rising Covid-19 cases elsewhere in the world, and the twice daily government announcements on the street loudspeakers. The announcements were in Vietnamese and were about new laws and restrictions. Our AirBnB host translated them for us as best as she could, but I felt out of touch with the reality around me. I was in a country where I didn’t speak the language, didn’t know the customs. Could we trust the low virus case numbers in Vietnam? I didn’t know how to judge the situation. So I didn’t know how to act.

Then I had a bad night. In the evening, before bed time, my Dutch embassy released a new travel advice for Vietnam: Code Orange. It meant that they advised all non-essential travelers to go home while they still could. The code was given not because the virus was peaking here, but because the embassy feared drastic measures from the Vietnamese authorities to prevent the peak from happening. Masks were already obligatory. Restaurants and public sites were closing. Under certain unpredictable circumstances, we could be placed in a state facility for quarantine. The country would likely close its borders soon with no flights coming in or out.

I was scared. What should we do? I checked our options, over and over. So many cancelled flights. So many stranded tourists everywhere. Going back to Europe would be expensive and complex, with transfers in countries where we might or might not be welcome. Imagine flying back through Moscow and seeing your last leg of the trip cancelled and Russia going into a lockdown. Escaping to Bangkok was still possible, but Thailand was said to change its travel restrictions at any moment. And was Thailand better than Vietnam? Traveling overall seemed like a stupid idea, a risk for us and others. And why travel to Europe where the virus was so much more prevalent?

All night long, I worried. I wanted to believe that staying in Hoi An was the safer and saner option. But what if the pandemic didn’t ease at all in the next few weeks? Could food security become an issue? Would I get the proper medical care if I needed it? What if we could not prolong our 30 day visa and had to leave the country? What if we then had nowhere to go?

I asked many people for advice and we ultimately decided to stay in Hoi An. I hated gambling with my health and safety, yet I also didn’t want to rush home in a panic. There were still so many Western expats in Vietnam who were not in a hurry to leave. They knew the country better than I did. Perhaps I should trust their trust.

We relocated to a property closer to the ocean where we had more space inside and out. We made sure to have enough cash and paracetamol, looked up where the best hospitals were, sent in the early extension-requests for our visas, received these extensions (hurray!), and stocked up on food essentials.

As predicted, things changed quickly. Vietnam closed its borders to all foreigners. Most commercial planes stopped flying. Neighboring countries closed their borders, too, or announced mandatory 14-day quarantines upon arrival. Visa waivers to countries such as Japan were no longer valid.

Late March, local authorities all over the country tracked down the foreigners still present in their provinces. Daniel and I had to provide exact information on where we had been for the past 30 days, flight numbers, taxis, addresses. We were also called up for a mandatory Covid-19 test. Symptoms or not, citizens and foreigners who had arrived into the country after March 8 were to be tested.

A member of the hotel staff escorted us and two Germans to the testing facility. We rode on bicycles, single file along the rice paddies, to a hotel called “Sincerity.” A team of English speaking professionals welcomed us, checked our identities, and asked us to wait around the pool. Other people were lounging there. We couldn’t tell whether they were guests of the hotel or people like us, waiting to be tested.

Daniel and I were called in as a couple. The medics took blood samples, swabbed our throats, and probed our nostrils. None of it was painful. We were treated with care, patience, and respect. When we asked whether we could photograph our experience, nobody objected. But afterward someone said she wished we would refrain from posting the pictures on social media. Images of testing facilities with doctors in medical gear could cause unnecessary worries. We were done in ten minutes and were not charged any fees.

A few days later, when confirmed virus cases were climbing to over 200, the Vietnamese government announced a minimum two-week social distancing period. It was a semi-lockdown. All non-essential businesses closed, along with the beaches. Nobody was allowed to move houses or travel between provinces (unless for essential work). Citizens were forbidden to leave the house unless for food or medical care. Buses and taxis no longer ran. Domestic trains and flights were reduced to one a day, yet often got cancelled.

Life remained calm during the semi-lockdown, which lasted three weeks. Many agreed it was for the best and (mostly) followed the rules. Nobody was panic shopping. Fresh food markets and supermarkets had no shortages. The only thing that made it eerie at times were the military helicopters circling overhead.

Daniel and I stayed on the property grounds and only made a few trips to a store. We focused on our writing projects and yoga practice. Somehow, the three weeks passed so quickly. (I will write a separate post on this period later.) Since a week, we are free again. There have been no community-spread cases for the past 16 days. Today, the total tally is 270. We are still wearing masks and gatherings of over 20 people remain off limits, but restaurants and businesses have reopened, and children will go back to school tomorrow.

Life in Vietnam has been very good for us. I am grateful to be in such a prepared country. The authorities did an amazing job in tracing cases and putting people in quarantine and taking strict measures early on. It remains unsure when Daniel and I can leave or how long we are allowed to stay. Our visa extensions expire in early June. But we will take it week by week. For the moment, we are happily stranded. We are healthy and writing and together and safe. What more can we wish for at times like these?

Stay safe everyone, wherever you are! Or, if you’ve fallen ill, I’m wishing you well!

P.S. Can you trust the numbers? people ask. I know the Corona situation here almost sounds too good to be true. But from what I can see in Hoi An, there is no reason to doubt the official numbers. The hospital is calm. There are no sirens. We have not heard of anyone being ill. For people who are interested in how Vietnam dealt with the pandemic, please read this article in The Nation.

The Art of Revision 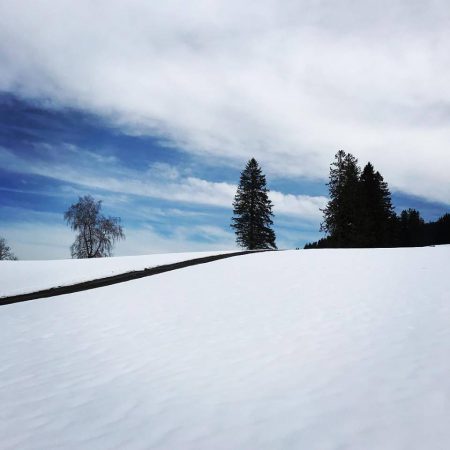 Top Things to Do in Zurich: Personal Favorites 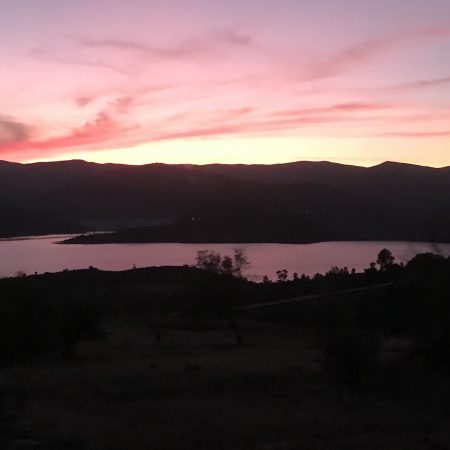 Alongside the Road from Tangier to Chefchaouen 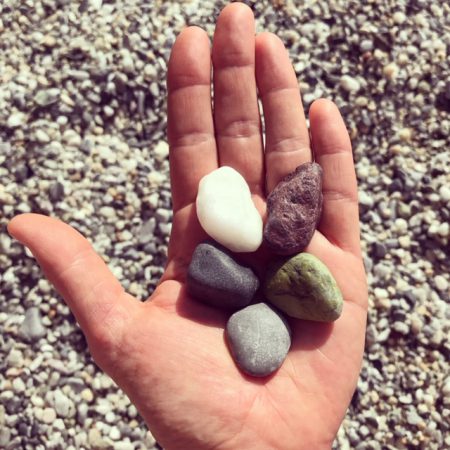 Skopelos: To Write or Not to Write